I’m sorry that I haven’t been keeping this blog up – it’s hard to find a moment with everything that’s been going on!

Since I wrote last I have been doing some speaking about women’s rights: on March 12th I gave a speech about the need for ERA at the Woman of the Year lunch given by the Los Angeles County Commission for Women… 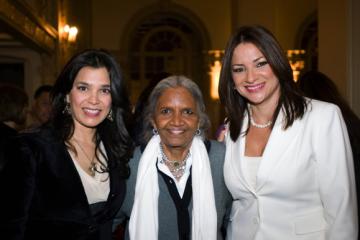 …and on March 10th I joined Lindsey Horvath, President of Hollywood NOW, on a panel about the state of hospitality workers in Los Angeles, most of whom are women of color: Women Pave the Way to Equality in the Tourism Industry.

Aymeric Montouchet, a brilliant cinematographer I was introduced to by Paul Dektor, has been shooting footage for us: first at Santa Monica College in the classroom of Professor Melanie Klein where we are piloting a class about women’s equality and the need for ERA. It will soon have an entire dedicated portion of this website; the students are doing research and shooting video, blogging and developing curriculum. It’s pretty impressive.

All of this while in pre-production on the documentary film about the state of women in America today. Which leads me to the title of this post: pre-production on the DC shoot. Gini, Jennifer and I fly out to DC on Tuesday to prep for Thursday’s shoot where we will be interviewing Congresswoman Maloney, Senator Menendez as well as covering the press conference and panel discussion about the 40th Anniversary of the ERA’s passage in Congress in 1972.

One Response to March 17th Prepping for DC Shoot