Call off the Catfight! – By Rachel Mellicker

Recently, I went to see a Broadway show. Flipping through the Playbill, I saw an article that upset me, provoking me to think and question the term “catfight.” The article by Harry Haun, was about a woman in a starring role in a Broadway production. Mr. Haun spoke about female actors who had been competing for her role, and described the competition as a “catfight”.

The definition varies a little according to the source, because some sources do not limit the word to a specific gender. The Merriam Webster website, however, says: 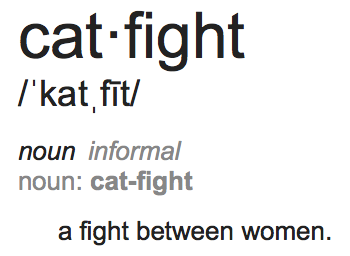 While this definition says nothing about having to be a physical fight, often the word wants to invoke thoughts of physicality. Catfights in popular culture tend to show women being very sexual and so sometimes catfights are thought of as “sexy” because of what the media has shown us. Our idea of a catfight is women screaming insults at each other and attacking one another physically. Even though in pop culture a “catfight” is usually between “sexy” women, in real life women can look any way and people will still say they are having a catfight.

According to Merriam Webster there must be millions of “catfights” everyday because people are always upset with each other. But the real problem is that catfight is a derogatory term. Our society tells us that it is a good and natural thing when men compete, but when women do it we have to sexualize it, laugh at it, and use it for the pleasure and amusement of others.

Why does our society think it is ok to characterize women in this way?

Women need to be able to compete and have disagreements without it being distorted into something negative and without the word catfight being used.

In fact, maybe men are uncomfortable that they can still learn from women that people can have a sense of community with those we don’t agree.

Can we try to conscientiously curtail our use of the word “catfight” to when there is actually a fight…………. among cats? Perhaps there was a time when the metaphor was clever and fresh but now it is old, lazy, sexist, and often just seeking a cheap laugh.